Karst and crew: Behind the scenes of award-nominated film Krabi, 2562

Karst and crew: Behind the scenes of award-nominated film Krabi, 2562

The two directors of Thai film Krabi, 2562, Anocha Suwichakornpong and Ben Rivers, have been nominated for the prestigious Achievement in Directing award for the 13th Asia Pacific Screen Awards (APSA), to be presented in Brisbane on November 21. 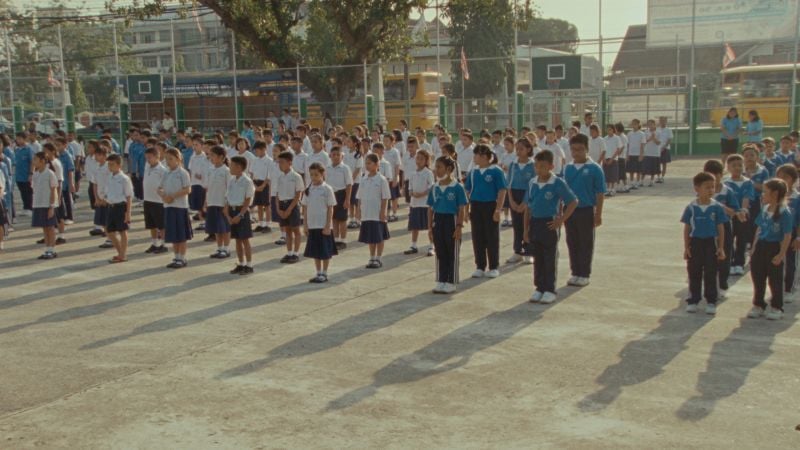 Some 37 films from 22 countries and areas of Asia Pacific achieved nominations for the prestigious awards, drawn from the 289 films in the APSA competition. The nomination means Anocha and Ben, both known for their experimental approach to their work, are now recognised in a field which includes some of the region’s top auteurs.

Their creative documentary Krabi, 2562 explores the landscape and stories within the community of Krabi. A major tourist destination, the filmmakers want to capture the town in this specific moment where the prehistoric, the more recent past and the contemporary world collide, sometimes uneasily. Here, the duo speak collaboratively about the process of creating the film.

What brought you together to make this collaborative work?

We have been friends for many years – since [Anocha’s film] Mundane History premiered in Rotterdam in 2009. After an invitation to Ben to participate in [visual art project] Thailand Biennale, we decided to collaborate.

It’s exciting to work with someone else after a period of working alone – it opens up new ideas and different ways of working. While our filmmaking practices are quite different, we both have an interest in the fluidity of fiction and nonfiction. It was a very easy process, of discussion, writing, raising funds through shared means, then directing and editing.

What led you to shoot in Krabi?

The Thailand Biennale was taking place in Krabi, and they were keen on new commissions responding to that particular place and landscape. We spent time there scouting locations and meeting people, and the film grew naturally from being in that area.

Are the myths and legends in the film subtracted from local culture?

The main one we used was the legend of Phra Nang Cave – this is explained twice in the film by the tour guide, firstly in Thai to a fictional character, then in English to two tourists. The story involves turning characters into parts of the landscape that we spend time in, which seemed like an appropriate and direct way to think about the relationship between storytelling, geology and time.

Mythology is a practice; it’s less of an artwork and more of an art form, one that is transmitted across generations. In the Thai context, mythology is an oral tradition. Our local coordinator, who was born and grew up in Krabi, told us that the fertility shrine shown in the film did not exist when she was a kid in the 1980s. Nonetheless, it is an immensely popular site now. This was interesting for us as it inadvertently raised some questions about local culture and authenticity, and by extension, the notion of locality itself.

How does the documentary approach work in your cinematic practice?

It’s nothing particularly new; it goes all the way back to early documentary, which was considered the creative use of reality. We have always liked the idea that a film can move between fiction and nonfiction fairly seamlessly, and that the two ways of working both involve considerable construction.

With this film we deliberately move between different ways of storytelling, from observational filmmaking, fictional scenes and stories being told in both interview form and within a scene from one character to another. What is “real” is not really important because in the end it is all cinema.

Why did you choose to shoot the film on super 16mm?

We did discuss the format from the beginning as we both wanted to try new ways of working for ourselves. But as we were spending time in Krabi it became evident that film would capture the light in a better way. There is a softer quality to film, and the hardness of digital didn’t quite match with what we were discovering in Krabi and how we developed the film in the writing stage.

The film features different animal statues around the province. Sheep, tigers, elephants... What was your intention here?

There’s also quite a few shots of live animals too. These animals are very much a part of the landscape that humans interact with, both their alive selves and their representations. During our research trip, we met a man who made all these animal sculptures, and he seemed to be one of the busiest people in Krabi. These animal statues are prevalent in public and private spaces throughout Krabi. In the past, some of the living animals that these statues represent, such as tigers and elephants, were commonly found in the area. As the city became more developed, the animals started to disappear.

What is the social reflection behind the juxtaposition of Neanderthals, the commercial crew and tourists?

Krabi is an ever-shifting zone which is certainly moving more towards heavy tourism. We were interested in this while not wanting to be judgmental about these changes. Krabi is the site of some of the earliest traces of prehistoric humans in Southeast Asia, and this is now used as part of the lure to the area.

We wanted to somehow bring this ancient world, extinct for some 40,000 years, into relation to the current one. So we have a commercial being shot on a small remote island, almost completely untouched by modern humans, where there is an encounter – we don’t know whether it’s real, or if it’s some strange rift in time – but the notion is that there is an infiltration. The same could be said of tourism.

The Thailand Biennale, for example, and other really great artworks (some of which you see and hear in the film), could be seen quite cynically as a way of increasing tourism. So while the curatorial team have very good notions of working with the community, the government body that funds it maybe has different preoccupations in terms of its purpose.